M, #36421
Pedigree
In the obituary of Catherine Stewart who died 27 January 1909, her son, Robert Smith of California, was listed as a survivor.1 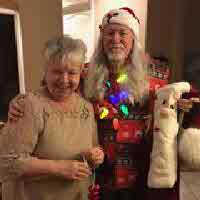 Merry Christmas to our friends and family,


I have been looking back at pictures, emails and messages from the past year. We were very mobile this year. As far as I can see and remember, the only complete months we spent in AZ were February, March, September and October, and hopefully, all of December.

Early in the year we had visits from my cousin, Dale Moffat, as well as my brother Lori and his wife Lorrie. It is great to share our home with friends and relatives. Even better when our relatives are friends.

We enjoy the winter months when a number of snowbirds descend on our area. We wish more would take advantage of our spare bedroom.

Matt and Ashley were traveling on business (usually separately) overseas as well as to Mexico, Brazil and within the US. I did a couple of solo child care visits to help them out, and Carole joined me for a third. Short stints of getting three kids up, fed and dressed for school is fine, but I wouldn't want to make a full time vocation of it.

Cara-Lee and Brandon needed help with child care due to his absences on training and other military trips, their relocation from Montgomery, AL to Washington, DC; and, most recently, James’ neurosurgery.

Of course, we also got to spend time with Nori-Lyn and family. In fact, Chai stayed there while we drove to Alabama in May. After helping out in Alabama, we stopped in New Orleans on our way back to the Dallas area. We stayed near the French Quarter, within walking distance of the World War II Museum. It was well worth the visit. Driving thru Louisiana bayou country was also quite interesting. The famous French Quarter is worth about that much time, a quarter hour. At most, tops, maybe less.

Madison drove with us back to AZ. She is a good traveler. After a week of baking, swimming and short excursions she flew back to Texas. She is a trooper. A couple of weeks later, Matt flew out with Ethan. Matt spent a couple of days, then it was back to Texas. Carole left for Alabama the same day to assist with the move. After a few more adventures here, Ethan, Chai and I drove to Texas.

Then I joined Carole and Cara-Lee’s family in DC.. After a few days of unpacking, we were able to do an excursion or two. We walked the Bull Run/Manassas battlefield where Stonewall Jackson earned his name. It is only about 30 minutes from Fairfax where the kids are living.

Brandon received his promotion to Lieutenant Colonel in the Air Force shortly after beginning his assignment to the Pentagon.

With the distances separating our family members, we appreciate the marvels of technology. FaceTime allows Grammy and Pop to visit our grandchildren (and their parents) whenever the spirit moves us. Baby Audrey didn’t make strange when Grammy arrived in person. She sees her every day.

If you have followed us on Facebook you also know that I had cataract surgery in Sept and October. It was miraculous! Since I was 16, I have worn contact lenses, and could only read at about 5 to 6 inches without my contacts. Surgery has changed that. I can read without them, but am too near-sighted for safe driving. In early November I finally received my new contact lenses, and can see better than I ever have. The correction they provide for my near-sightedness requires that I use reading glasses, but that is a small price to pay.

The downside was that from Aug 8 until about Nov 10th I had restricted vision. I was essentially blind until my first surgery on Sept 5th. I listened to TV, with Carole providing color commentary and listened to Audible books. She also got to do all of the driving during that period. It is surprising how often I told her I was heading to Lowe’s or some other store, to be told that I couldn’t drive myself. It was an adjustment. I was on genealogy withdrawal for the first few weeks as well. I couldn’t get my nose close enough to the computer screen. I was able to manage with one eye after Sept 5th.

Once I could work on the computer again, I started using a new piece of software to write an eBook on our Summach family. It combines my love of history, and genealogy. I have not done much work on it in the last month, but hope to have it ready for distribution early in the new year.

I also was fitted with hearing aids to correct Carole’s mumbling. She does not need to repeat herself nearly as often as before. I thought I had one bad ear. Wrong. I also learned that I was lip reading a lot of the time.

As I mentioned above, grandson James, aged 4 in October had surgery to relieve chronic intracranial pressure. It is encouraging how many positive changes have occurred in his skills, walking and speech in the few weeks since the surgery. We look forward to further progress, but he also needs another hip surgery in early February. Once again he will be confined to a “spica” cast which will immobilize him for about 6 weeks.

James came home from the hospital on Thanksgiving Day. While Mommy and Daddy were getting him, Carole was privileged to witness Audrey’s first extended walk. Carole put her down and Audrey took several steps backward. Then she turned and toddled out of the kitchen, looking for big brother Matthew. Carole even caught most of it on video.

It has been four years since my cancer surgery, and follow up tests continue to show I am clear of cancer. We are truly blessed.

Carole fills her days with knitting, visiting on Facetime with grandbabies and their mothers, reading, preparing for the weekly ladies bible study that she leads and putting up with me. With her eBike to flatten out the hills, she rides 8-10 miles two or three times a week. Our friend Paul claims she is cheating, but her orthopedic surgeon told her she could only ride if there were no hills. Technology to the rescue once again.

When it is not 95 degrees or above, you will also find me biking with the aforesaid Paul. I need him to motivate me. I also still spend hours with genealogy research, listening to Audible books and old fashioned reading.

Nori-Lyn, Brian and Caleb arrived here two evenings ago. Last evening they were able to attend our First Annual Mesa Christmas party at Colleen and Dave’s for any Summach relatives in the area. There were 17 of us for good food and lots of laughs. Poor Caleb was the only attendee under 35.

We will host about 16 friends and relatives for Christmas dinner. Carole’s sister Lyn is flying in late this evening.

To all reading this letter, we extend heart felt Christmas greetings, and sincerely invite you to visit Mesa sometime. We would love to see you.

M, #36427, b. 12 September 1961, d. 26 May 2013
Pedigree
He was born on 12 September 1961 at Trenton, Trenton Twp., Hastings County, Ontario, Canada.1
He died on 26 May 2013 at Petawawa, Renfrew County, Ontario, Canada, at age 51.1
The following selected information is extracted from his obituary.2
In the obituary of Sherleen Luckasavitch who died 31 March 2011, her son-in-law, Clarence Welton, was listed as a survivor.3
See the footnotes below for a link to his obituary that appeared in his memorial page on the web site of Neville Funeral Home published in Pembroke, Ontario, circa 27 May 2013.2