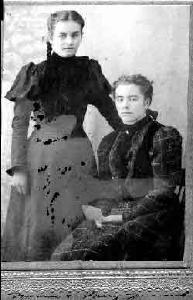 In the obituary of Lydia Summach who died 19 October 1938, Lydia's sister, Mrs. S Denzin was listed as a survivor.2324

The following newspaper article appeared in the newspaper the Leader-Post published in Regina, Saskatchewan 9 February 1954 :
Pioneer farmers have anniversary
Gold edged serviettes, sent from Scotland, were used at a dinner party honoring Mr. and Mrs. Sam Denzin. 3621 Dewdney avenue. Well-known pioneer farmers of the Tregarva district, Mr. and Mrs. Denzin observed their 50th wedding anniversary at their home Jan. 20. Thirty guests, including their family and immediate relatives were present.

A three -tiered wedding cake, decorated by gold leaves and topped with yellow tea roses, centred the table. The serviettes were from Mr. and Mrs. W, Scouler, parents of their son-in-law, T. Patterson and their daughter-in-law, Mrs. A. Denzin. Yellow [ ] and red roses decorated the rooms.

Mrs. Denzin wore a corsage of yellow roses to complement her dress while Mr. Denzin wore the same boutonnaire (sic), artificial lily-of-the-valley, which he had worn on his wedding day.

Messages
They were the recipients of many congratulatory messages and cards, two cups and saucers with gold overlay and one gold overlay cake plate. During the evening guests autographed a gold organdie tea apron. At the conclusion of the social evening a wedding cake and a gold cake were served.

Those attending from a distance were the bride's brother and sister-in-!aw, Mr. and Mrs. August Zummack (sic), Asquith, Sask.

Mr. Denzin was born at Palmer Rapids, Ont while Mrs. Denzin, the former Minnie Zummack, was born at Renfrew, Ont, Mr. Denzin came to Saskatchewan in 1892 and homesteaded in the Tregarva district.

He returned to Ontario in 1904 to be married at the home of his bride's mother at Raglan, Ont. After the wedding they came to their Tregarva farm where their daughter Ethel (Mrs. I. Patterson, Craven) and their son, Arnley, were born. Sisters Minnnie and Mary Zummach
She was born on 3 August 1884 in Renfrew County, Ontario, Canada.6,2,9,4,5 Alternatively, she was born circa 1883 in Raglan Twp., Renfrew County, Ontario, Canada, since she was 8 in the 1891 census, 23 when she married and 37 in the 1921 census.10,7,11 Mary married Cecil Seed on 10 January 1907 in Rosenthal, Raglan Twp., Renfrew County, Ontario, Canada, according to Ontario Marriage Registration 018626. He was a farmer and she was a domestic. Both were Methodists.12,13,2,3,4,7,5,11
Other information from their marriage registration and/or news article about their wedding:
The registration listed the following official witnesses: August Zummach. His parent(s) were listed as Alexander Seed and Bella Cooper. Her parent(s) were listed as August Zummach and Mary Noak.7

She died in 1964.14,4 Mary Seed was buried in Tregarva Cemetery, RM of Lumsden No. 189, Saskatchewan, Canada.4
She also went by the name of Marie or Maria in various census enumerations. Variations on her surname included Sumach, Zummach and Zumach.
Mary Sumach was a survivor of her father August who died in 1890 when she was 6 years and 10 days old.15 Mary Summach was listed as a witness to the marriage of Annie Zummach and Thomas Abraham Boland on 18 July 1903 in Rockingham, Raglan Twp., Renfrew County, Ontario, Canada; according to Ontario Marriage Registration 016769. Thomas gave his occupation as Lumber Cutter, and Annie was a Farmer's Daughter.16,17,18,1920

Mrs Cecil Seed, (Mary) soon to be mother-in-law of the bride-to-be, was referenced in an article about the bridal shower for Kathleen Rennick published on 22 October 1929 in the newspaper the Leader-Post.21

M, #600, b. 20 May 1950, d. 5 April 2008
Pedigree
He was born on 20 May 1950.1
He died on 5 April 2008 at age 57.3
The following selected information is extracted from his obituary. Predeceased: Walter Panagapko and Ruth Panagapko.3
His name was also recorded as Norman Patrick Panagapgo.2 He also went by the name of Norm.4
See the footnotes below for a link to his on-line obituary that appeared in the newspaper the Ottawa Citizen published in Ottawa, Ontario, 6 April 2008 .3

The following obituary appeared in the newspaper the Ottawa Citizen published in Ottawa, Ontario 6 April 2008 :
Deaths
PANAGAPKO, Norman Patrick In his 58th year, on Saturday, April 5, 2008, with all his family around him and thoughts and prayers from all, Norm died peacefully. Beloved husband of Kathryn (nee Krieger); loving father of Kurt (Lisa) and Brent (Stacey); much loved Grampie of Eric, Riley, Gracey and Karson. Predeceased by his parents Walter and Ruth Panagapko and brother Jim. Dear brother of Gord (Marilyn) and Doug (Dorothy) and brother-in-law of Brenda. Norm will be sorely missed and fondly remembered by many other relatives and friends. Visitation at McEvoy-Shields Funeral Home, 1411 Hunt Club Road (at Albion), on Monday, April 7 from 2-4 and 7-9 p.m. Masonic Service at 6:45 p.m. Funeral Service on Tuesday, April 8 at 11 a.m. in the chapel followed by private cremation. In memoriam donations to Victoria's Quilts Canada would be appreciated. Condolences may be sent to www.mem.com
Do not publish this since it is probably covered by copyright.3