MAC119 Lydia (Summach?)
"Aunt Lydia"
Annotation by Grandpa Fred
I am uncertain of this attribution because it would have been taken relatively early in the history of photography

Lydia Sumach was a survivor of her father August who died in 1890 when she was 3 years, 5 months and 9 days old.13 Lydia Summach was listed as a witness to the marriage of Whilhelminna Zummach and Samuel Denzin on 20 January 1904 at Raglan Twp., Renfrew County, Ontario, Canada; according to Ontario Marriage Registration 016664.14,15,16,17,1819 MAC082 - "To Fred, Lydia and Alex"
Alex and Lydia Potter with an unidentified lady.

A similar announcement appeared on October 20th, announcing the time and location of the funeral.

Note: Belmont is now a part of Edmonton, in the NE corner of the city.2


In the obituary of Alexander C Potter who died 20 January 1955, his wife, Lydia Summach was not listed as a survivor.21

M, #609, b. 6 January 1986, d. 8 April 2015
Pedigree
He was born on 6 January 1986 at Pembroke, Alice Twp., Renfrew County, Ontario, Canada.1,2
He died on 8 April 2015 at Ontario, Canada, at age 29 near Tweed.2,3
The following selected information is extracted from his obituary. Survivor(s): Harry Brose and Lillian Brose.2
In the obituary of Lillian Brose who died 1 December 2015, Lillian's step-grandson, Andew Brose was listed as predeceased.4
In the obituary of Harry William Brose who died 26 February 2017, Harry's grandson, Andew Brose was listed as predeceased.5 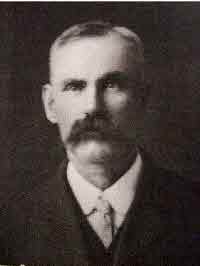 The following obituary appeared at the book Reflections of a Century compiled by the Eganville Leader (2002) published in Eganville, Ontario circa 26 April 1946 :
Death of Well-Known Citizen of Killaloe
The unexpected death on Thursday at the noon hour of Mr. Thomas A. Boland came as a shock to the people of Killaloe. Mr. Boland was a general merchant and widely known and respected. On Sunday, he observed his 75th birthday, and many friends called on him to offer felicitations. The funeral will be held from his late home on Sunday, April 28th, at 1:30 o'clock, p.m., to the Church of the Ascension, Killaloe. Interment in St. John's Cemetery, Eganville, Ontario.29

M, #617, b. 14 January 1933, d. 17 December 2011
Pedigree
He was born on 14 January 1933.2,1
He died on 17 December 2011 at Ontario, Canada, at age 78.1
The following selected information is extracted from his obituary.1      Donald Lorne Gow was buried on 22 December 2011 at Capital Memorial Gardens, Ottawa, Carleton County, Ontario, Canada.1
He was commonly known as Donn.2
In the obituary of Barbara May Krieger-Friesen who died 28 January 2009, Barbara's son-in-law, Donald Gow, was listed as a survivor.3
See the footnotes below for a link to his obituary that appeared in the newspaper The Ottawa Citizen published in Ottawa, Ontario, 20 December 2011.1