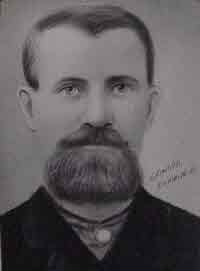 KHP007 - "Granpa Zummach"
Killaloe Digital Library Collection
This identification has been confirmed by Harley Summach who has a large framed version of this same picture - July 2016
He was born in November 1854. This is an estimate taking the year as recorded on his gravestone and the month from the church register referenced below. This aligns with his being 3 at the time of immigration from Hamburg.1,5 Alternatively, he may have been born on 15 November 1856 at Haselau, Schleswig-Holstein, Prussia/Preußen (modern Germany), as recorded in the First Baptist Church Register. It also gives his birth location as Hasela (sic), Pomerania which I assume is the same place as Haselau. Parts of Pomerania were included in Prussia during the 18th and 19th centuries.7,4,5,6,2 August married Maria Noack on 21 November 1877 at Hagarty Twp., Renfrew County, Ontario, Canada.3,8,7,4,2
Other information from their marriage registration:
The registration listed the following official witnesses: John Summach and Wilhelmina Ristau. His parent(s) were listed as Carl Summach and Wilhelmina Summach. Her parent(s) were listed as Matthias Noack and A. Noack.4

He died on 13 August 1890 at Raglan & Radcliffe Twps., Renfrew County, Ontario, Canada, at age 35 according to Ontario Death Registration 015166.7,1,9      August Zummach was buried at Emmanuel (aka Immanuel) Baptist Cemetery, Killaloe-Hagarty-Richards Twp., Renfrew County, Ontario, CanadaG.1,10,11 The informant on his death registration was his wife Maria, Mrs. Sumach.9 The cause of his death was given as unknown after being sick for 12 months. His death registration does not indicate he was seen by a doctor near the time of his death.9

August Summach appeared on the 1871 Canadian Census of Sebastopol Twp., Renfrew County, Ontario in the household of his parents, Carl Summach and Mary Summach, listed as a farmer.6
August Zumach was found on a passenger list of the "Copernicus" bound for Québec City with his parents Carl and Wilhelmine dated 1 April 1858 at the Port of Hamburg. They sailed in steerage class. Karl was listed as a husbandman, or at least that is how Google translates the German term.5 They landed on 13 May 1858 after a voyage of about 6 weeks at Québec City, Canada East, United Province of Canada, arriving on board the Copernicus.12
Click to learn more about the ship "Copernicus".13

The following biographical information was published at the newspaper The Ottawa Journal in Ottawa, Ontario, 11 July 1970:
"August Sumac (sic) was the mail courier. He lived at Rosenthal and rode his nag to Rockingham. Here he would meet the stage coach from Eganville or Combermere. Then he would finish his route on foot to Palmer Rapids"

Note: this full page article was about the early history of Rockingham in Renfrew County.17 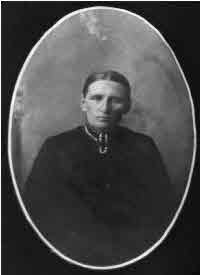 Mary Summach née Noack
She was born on 22 February 1858 at Heinersbrück, Spree-Neiße, Brandenburg, Prussia/Preußen (modern Germany).2,4,6,7,8,9,10 Church records identify her parents as Matthes Noack and Anna Hühnchen.10 Alternatively, she may have been born in September 1857 at Germany according to the 1911 census.11,12,5 She was baptized on 14 March 1858.10 Maria married August Summach on 21 November 1877 at Hagarty Twp., Renfrew County, Ontario, Canada.13,14,15,4,12
Other information from their marriage registration:
The registration listed the following official witnesses: John Summach and Wilhelmina Ristau. His parent(s) were listed as Carl Summach and Wilhelmina Summach. Her parent(s) were listed as Matthias Noack and A. Noack.4

Mary Summach Funeral Card - Details
Mary Summach was buried on 17 May 1926 at Avondale Woodlawn Cemetery, Avondale district, RM of Vanscoy No. 345, Saskatchewan, Canada, after her memorial service was held at the home of her youngest son, Fred Summach.3,6,17

The Avondale Baptist Church was organized in the home of William and Ida Wellwood on 27 May 1921 in the Avondale district, south of Asquith. He was one of the first deacons of the church. Mary Summack, Mrs. August Summach was one of the charter members.28
The following information is from my personal research:
An old family album containing pictures of Matt, Albert and August O Noack with a notation that they were her half-brothers was my first evidence that Mary's surname was Noack.

My "Uncle" (actually great-uncle) August Summach wrote that he and Fred convinced Mary to sell the farm in Ontario to finance their moving west to Saskatchewan.

Over the coming years she appears to have vistied or even lived with the families of her daughters Mary Seed and Minnie Denzin. At sometime later in 1921 she moved to Edmonton to live with Lydia and Alex Potter. She returned to the Avondale farm in 1922.

Manley Summach told me that Mary did not like the prairies of Saskatchewan where her sons settled. She was the reason that Alex and Lydia (Summach) Potter moved to Edmonton. Later when she became sick she returned to the farm in the Avondale district. This is where she died in 1926. The Potter's farmed in what became the Steele Heights district in what is now Northeast Edmonton. In the 1940's John and Lydia Watson (Carole's parents) had an acreage in the same area.29