Lillian Lockwood appeared on the 1921 Canadian Census of Chaplin, Saskatchewan in the household of her parents, Daniel Lockwood and Jennie Lockwood.4
In the obituary of Daniel Benjamin Lockwood who died 11 June 1955, his daughter Margaret, Mrs. Glen Motta, of Regina, was listed as a survivor.6 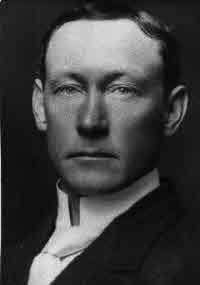 Alfred and Myrtle Moffat about the time of their 1909 marriage

Alfred and Myrtle Moffat appeared on the 1916 Census of Canadian Prairie Provinces, RM of Edenwold No. 158, Saskatchewan, enumerated 1 June 1916, described as a farmer and a Presbyterian. Their children Janet and Annie were listed as living with them. As was his brother-in-law, Robert H. White, who was included in the household.6
Alfred and Myrtle Moffat appeared on the 1921 Canadian Census of RM of Enniskillen No. 3, Saskatchewan, at land location 16 03 03 W2, east of Frobisher, enumerated 1 June 1921. Alfred was described as a farmer. Their children Jennet, Annie, Herbert and Graeme were listed as living with them. Religion was given as Union, reflecting the decision of the Frobisher congregation to be one of the first to join the United Church. They were still living on their first farm, east of frobisher.25
In the obituary of Janet Riddell who died 10 January 1932, Janet's brother, Alfred Moffatt (sic) was listed as a survivor.26
Alfred Moffat was referenced in a newspaper article about Thomas Graeme Moffat on 17 July 1940 at the newspaper The Canadian Statesman.27
Alfred Moffat was recorded as father of the bride at the marriage of G. Elmer Hume and Janet Langdale Moffat on 24 October 1940.28
The following obituary appeared Alameda Dispatch published in Alameda, Saskatchewan 8 May 1942:
Sudden Dealh Claimed Alfred Moffat on Monday
It is with sincere regret we record the death of Alfred Moffat, Frobisher, which took place on Monday morning, 4th of May at St. Joseph's hospital, Estevan, aged 64 years and 7 months. Deceased had been in failing health for about two years but there was no evidence of anything serious; he entered the hospital on Tuesday 28th alto to undergo an operation for rupture; the operation was performed on Wednesday and the patient appeared to be progressing well; his wife and family visited him on Sunday and he was then considered to be on the road to recovery; on Monday morning they were notified of his turn for the worse and death came peacefully. Born in Newtonville, Ont. in the year 1878, he came to western Canada in March 1909 and settled in Frobisher district; in August of that year he was married at Moose Jaw, to Miss Myrtle White; four of a family were born to the union being: Janet (Mrs. Elmer Hume of Carlyle), Annie, at Matheson, Ont., Herbert at home and Graeme, a student at the University of Saskatchewan, at present at home.
The late Mr. Moffat was of a quiet and retiring disposition, not given to active participation in local organizations; he was a devoted husband and an indulgent father, exemplifying the type of citizen who built this new west; in farming he was successful and respected by all who knew him; his passing has left a void in the home where he was beloved; to his sorrowing wife and family the deepest sympathy is being extended. Deceased leaves two brothers, Thomas at Newcastle, Ont. and Roger at Frobisher.
The funeral will be held on Thursday afternoon, 7th inst., service being conducted at the family residence commencing at 2:30 o'clock; interment will follow in Frobisher Cemetery.
My father (Graeme Moffat) has always said that the hard depression years killed his father. The work and worry wore him down. Oil was not discovered on Alfred's land until year's after his death
Note that Alfred's funeral was held on his wife's 64th birthday, May 7th, 1942.29

In the obituary of Janet Hume who died 4 December 2007, her parent(s), Alfred Moffat and Myrtle Moffat were listed or implied as predeceased.33
The following analysis is from my personal research and reflects my attempts to consolidate information from different sources.
Don't get mislead by the Saskatchewan Homstead database. The Alfred Moffat filings 1858466 and 1889554 are for a different individual. This land is located east of Alsask.