Military Service - New Zealand Expeditionary Force
Ronald Wentworth White began military service in 1915 as a Private, joining the 2nd Bn., Wellington Regiment. His occupation was given as a draper.10,5
On 4 March 1916, he embarked for the Suez Canal with the New Zealand Rifle Brigade from Wellington, New Zealand on Mar 4, 1916.11
The following obituary appeared in the newspaper the Taranaki Daily News published in New Plymouth, Taranaki 9 October 1916:
WHITE
Killed in action, on September 14, 1916, Ronald Wentworth White, beloved son of Percy J. H. White, and Edith White; in his 20th year.3

The following obituary appeared in the article "The Fallen and Wounded" in the newspaper the Press published in Canterbury 11 October 1916:
Corporal Ronald White (killed) was 20 years of age, and the eldest son of Mr. P. White, of New Plymouth. After leaving the New Plymouth High School he entered the local branch of the Bank of New Zealand, and subsequently went to Feilding, from which place he enlisted.8

In the obituary of Percy James Hoyland White who died 16 December 1942, Percy's daughter, Mesdame R Hawkins was listed as a survivor.4 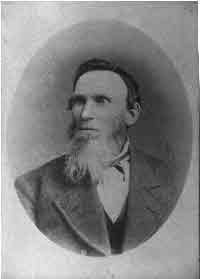 Among the Contributors to Support of Ordinances, 1885 were:
Mr. J. A. Gairdner $12
Mr. W. Moffatt Sr $12
Mr. William Moffatt $ 3
Mr. J. Renwick $30
Mr. H. Renwick $10
Mr. J. G. Renwick $15
Mr. F. Squair $13.25
Walter Moffitt was recorded as the father of the bridegroom at the marriage of David Moffitt and Aggie Balintyne Scott on 11 December 1889.26
In the obituary of Janet Riddell who died 10 January 1932, Janet's father, Walter Moffatt was listed as predeceased.27
The following biographical information is from my (Rick Moffat's) personal knowledge or recollections, circa 2000:
Moffat, Walter
1821-1899
Walter R. Moffat and Agnes Graeme were married in Scotland and came to Antioch and Newcastle in what would become Ontario by ship on their honeymoon. They settled on a farm near Newtonville, Ontario. For their voyage they had two large wooden boxes (called KYST) to hold their possessions. Janet Hume had one of them in Carlyle (see picture with Cara-Lee Moffat at age 3 standing beside it.) Janet also had a gray plaid (14 feet long by 40 inches wide) that Agnes and her daughter Janet spun the yarn for, and had a weaver make it up.

Janet gave the Kyst, ring, broach, earring and other aticles to Rick Moffat when she broke up her household and moved to the senior's lodge in Carlyle, Sask. Pat Allen nee Moffat now has this plaid, as well as a rocking chair that belonged to Alfred and Myrtle Moffat.

Mrs. Johnston, before her marriage 52 years ago last Christmas, to her late husband, was Miss Susie White, second eldest daughter of the late Mr. and Mrs. T. B. White of Collingwood. To this union were born two girls and three boys, one son, Clarence, having predeceased his parents; surviving are: Frank at Port Credit, Mrs. Geo. Stewart of Powassan, Mrs. Harry Sparling, of Thornbury and Fred of Benito, Man. The last named was home here a few years ago, but will be unable to be at the funeral of his mother which takes place this afternoon at the Union Cemetery, Thornbury.

The funeral will be in charge of Rev. H. Howey of Grace United Church, at which services she was a most faithful attendant when health permitted. Beautiful floral tokens to be seen spoke in a mute manner of the esteem in which her memory was held.18

M, #879, b. 23 February 1944, d. 31 October 2007
Pedigree
He was born on 23 February 1944 at Parry Sound, District of Parry Sound, Ontario, Canada.3,1
He died on 31 October 2007 at West Parry Sound Health Centre, Parry Sound, District of Parry Sound, Ontario, Canada, at age 63.3,2
The following selected information is extracted from his obituary. Predeceased by his parents: Leslie White and Vera White. Predeceased: John Webb.2
See the footnotes below for a link to his obituary that appeared in the online newspaper the MuskokaRegion.com published in Huntsville, Ontario, circa 1 November 2007.2