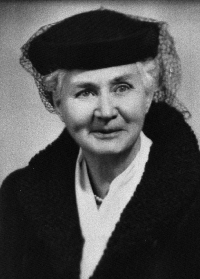 Alfred and Myrtle Moffat about the time of their 1909 marriage
She was baptized on 21 June 1962 at Asquith Baptist Church, Asquith, RM of Vanscoy No. 345, Saskatchewan, Canada. I can remember that they filled the baptismal tank with warm water by running a hose from the Manse next door to the old church. Grandma was 84 at the time.2,18
She died on 17 May 1970 at Estevan, Saskatchewan, Canada, at age 92.15
The following selected information is extracted from her obituary. Survivor(s): Mrs. G Hume, Mrs. C. Harvey, Herbert Moffat and Graham (sic) Moffat. Predeceased: Alfred Moffat.19      Myrtle White was buried on 20 May 1970 at Frobisher Resthaven Cemetery, Frobisher, RM of Coalfields No. 4, Saskatchewan, Canada.20,21

Myrtle White is referenced in my notes regarding Helen Elizabeth White
After Frank White's wife, Elizabeth died in May 1906, Myrtle White and her mother, Martha White moved to Cincinnati to live with Frank. Myrt helped look after Helen who was about 3 1/2 years old until about 1908 when she moved to Saskatchewan where she met and later married Alfred Moffat. Frank remarried in 1909. I have a photo album from Aunt Janet with many pictures from this Cincinnati time period. Martha remained in Cincinnati until her death in 1919.2 She lived at the Southwest corner of Summit Ave and Eighth St., Cincinnati, Hamilton County, Ohio, USA, in 1907 at the home of her broither, E. Frank White.25
Myrtle White was Matron of the YWCA in 1908 at Moose Jaw, Saskatchewan, Canada.2

Myrtle Moffat and Alf Moffat appeared on the 1911 Canadian Census of Saskatchewan, enumerated 5 June 1911, described as a Presbyterian and a farmer. Their daughter Jennett was listed as living with them.10
The following article appeared in the Alameda, Saskatchewan Alameda Dispatch, 23 July 1915 :
Frobisher
...Mrs. Moffat and daughter, of Regina, is visiting at the home of Mr. and Mrs. Alfred Moffat
Note that Mrs. Moffat and her daughter were the former Maggie Kerr and Gladys Moffat.26

Alfred and Myrtle Moffat appeared on the 1916 Census of Canadian Prairie Provinces, RM of Edenwold No. 158, Saskatchewan, enumerated 1 June 1916, described as a farmer and a Presbyterian. Their children Janet and Annie were listed as living with them. As was his brother-in-law, Robert H. White, who was included in the household.17
In the obituary of Martha Smith who died 13 July 1919, her daughter Myrtle, Mrs. Al Moffat of Frobisher, SK, was listed as a survivor.27
Alfred and Myrtle Moffat appeared on the 1921 Canadian Census of RM of Enniskillen No. 3, Saskatchewan, at land location 16 03 03 W2, east of Frobisher, enumerated 1 June 1921. Alfred was described as a farmer. Their children Jennet, Annie, Herbert and Graeme were listed as living with them. Religion was given as Union, reflecting the decision of the Frobisher congregation to be one of the first to join the United Church. They were still living on their first farm, east of frobisher.28
The following article appeared in the Bowmanville, Ontario The Canadian Statesman, 18 July 1940 :
Mrs. Alf Moffat, Frobisher, Sask., and her daughter, Miss Annie Moffat who has been teaching the Beatty school, Cochrane District, have been visiting Mr. Thos. Moffat and Mrs. Moffat's nieces, Mrs. W. F. Rickard and Mrs. Geo. Allin. Mrs. Alf. Moffat is the wife of Mr. Thos. Moffat's youngest brother.29

Mrs. Alfred Moffat was recorded as mother of the bride at the marriage of G. Elmer Hume and Janet Langdale Moffat on 24 October 1940.30
In the obituary of Alfred Moffat who died 4 May 1942, Alfred's wife, Myrtle White was listed as a survivor.31
After her son Graeme graduated from the Vet college, she moved to Asquith to live with him. She had a small house next door to the house where we lived when I was born.2
In the obituary of Annie Sine who died 18 March 1949, her sister, Myrtle Moffat of Asquith, Saskatchewan, was listed as a survivor.32,33
In about 1958/59, Gladys Sparling spent a year or two in Asquith, Saskatchewan, living with her Aunt Myrtle Moffat. Grandma Myrt's memory was slipping, and she needed a companion. Gladys often spoke of her grandchildren, Margy and John. In 1959 we took a road trip to the Rockies, and later took Gladys to Waskesiu with us.
By 1961 she had returned to Ontario.
When we received news of her death in Nov 1962, my brother Lori thought she died with a "tack in her heart." He was 6 at the time.2
In about 1963, Grandma sold her home in Asquith and alternately lived with Aunt Janet in Carlyle, Saskatchewan, and with Aunt Annie on the farm near Hagersville, Ontario. Some time between 1966 and 1970, she moved into the senior's home in Estevan.2
See the footnotes below for a link to her obituary that appeared in the newspaper The Leader-Post published in Regina, Saskatchewan, 27 May 1970.19
In the obituary of Herbert Alfred Moffat who died 14 September 1996, his parent(s), Alfred Moffat and Myrtle White were listed or implied as predeceased.34
Inscription on Myrtle Moffat's piano, currently in the possession of Jackie Farrell (1998):
Grand Piano in Upright Form, Patented March 1896, Heintzman & Co., Toronto, 23979

We are told that Grandma took this piano to Cincinnati when she lived there looking after Helen White after her mother's passing. It later came to Frobisher where Alfred and Myrtle farmed. Mom (Estelle) refinished the piano in the mid-70's. At that time she replaced the ivory keys. Dad had taken a paring knife to the edges of the keys when he was a child. Many of them had chipped corners. While moving the piano during this project, it tipped and fell over backwards. It was saved from major damage falling on the concrete basement floor when it landed on a small triangular stool with a saddle leather seat. At one time the piano was used by Asquith Baptist Church. However, if was relegated to the basement and when we moved to Moose Jaw in 1965 Mom received permission to reclaim it.2


In the obituary of Janet Hume who died 4 December 2007, her parent(s), Alfred Moffat and Myrtle Moffat were listed or implied as predeceased.35

In the obituary of Bertha Langdale who died 7 February 1973, her husband, William G. Langdale Sr. was listed as predeceased.15

M, #6, d. 1941
Pedigree
Charles married Jessie R Russell before 1919.2
He died in 1941.3
He was commonly known as Kenneth.3
In the obituary of Jean Margaret Spottswood who died 2 February 2005, Jean's father, Charles Kenneth Spottswood was listed as predeceased.4

He died on 25 March 1945 at 4202 Hamilton Avenue, Cincinnati, Hamilton County, Ohio, USA, at age 67.3
Dr. Rupert Hill Langdale was buried on 28 March 1945 at Evergreen Cemetery, Southgate, Campbell County, Kentucky, USA.3,10,9
Rupert H. Langdale appeared on the 1880 U.S. Federal Census of Miller Twp., Dearborn County, Indiana, in the household of Thomas Langdale.4 He was graduated He was listed in the Junior Class of 1890-91 in 1902 at Ohio College of Dental Sugery, Cincinnati, Hamilton County, Ohio, USA.11,12
The General catalogue of Oberlin college for 1908 recorded that he was a Dentist in Rangoon, Burma, India.11
Dr. Rupert Hill Langdale was recorded as a dentist when he returned to USA from Liverpool, England, UK through Ellis Island. He traveled aboard the Carmania. on 16 June 1909.13,11
The following article appeared in the Cincinnati, Ohio The Cincinnati Enquirer, 19 June 1909 :
Dr. Rupert Langdale, son of Mr. and Mrs. R. H. Langdale, arrived last night at the home of his parents, in the Alexandria, after having been in business in India for seven years. He was greeted at the train by a number of friends, who gave a dinner in his honor immediately upon his arrival.14

The following article appeared in the Cincinnati, Ohio The Cincinnati Enquirer, 4 July 1909 :
Mr. and Mrs. R. H. Langdale, of the Alexandra, are enjoying a visit from their son, Dr. Rupert Langdale, who is home from Rangoon, India. He is being much feted by his old friends here, after his sojourn of seven years in India. He was graduated from a dental college here, and two weeks later sailed for India, and practised there successfully for many years. He will also visit his brother, Rev. L.(sic) G. Langdale, in Boston.15

The following article appeared in the Cincinnati, Ohio Cincinnati Commercial Tribune, 7 October 1909 :
Newport Girl To Marry Doctor From Calcutta
Miss Mayme Willis and Dr. R. H. Langdale Will Be Wedded Soon.
Considerable surprise was occasioned in Newport society circles yesterday, when the announcement was made by Mr. and Mrs. Charles H. Willis of East Fourth street, Newport, of the approaching marriage off their daughter, miss Mayme Willis, and Dr. Rupert Hill Langdale of Calcutta, India. The wedding, which will be a quiet home affair will be celebrated at the resin deuce of the bride-to-be, 525 East Fourth street, Newport, week after next, the date to be set soon as Dr. Langdale returns from the Orient. The bride-to-be is an accomplished young musician and well known in society circles in Newport and the surrounding cities. Her fiance is the son of a prominent family in Cincinnati and only a year ago he went to India, where he has established a splendid practice. Following he wedding the couple will return to Calcutta to reside.16

The following article appeared in the Cincinnati, Ohio The Cincinnati Enquirer, 17 October 1909 :
The engagement is announced of Miss Mayme Willis, daughter of Mr. and Mrs. Charles H. Willis, of Newport, Ky., to Dr. Rupert Langdale, son of Mr. and Mrs. R. H. Langdale, of Walnut Hills. Dr. Rupert Langdale arrived home about three months ago, after residing for seven years in Calcutta, India. Soon after graduation from two colleges he went to Calcutta and practiced there in his chosen profession. He has spent his vacation at home, and rumor has it that this has been an automobile romance. Soon after arriving in Cincinnati he purchased an auto and at a party the same evening was presented to Miss Willis. There have been long automobile rides almost daily ever since.

Both young people have scores of friends in Cincinnati and Newport. The wedding will take place thiscoming Tuesday, at the home of the bride's parents, relatives and intimate friends in attendance. The bride and groom will leave Tuesday night for Boston, to visit for a few days Mr. Langdale's brother, Rev. Thos. G. Langdale, and wife, and on the 23d (sic) will sail for Calcutta, India, which will be their home for some years to come.
------------
The Langdale-Willis engagement was announced Tuesday at a reception given by the bride's mother. Roses and carnations formed the decorations. Mr. R. H. Langdale, mother of the groom elect, assisted in the hospitalities.7

The following article appeared in the Cincinnati, Ohio The Cincinnati Enquirer, 24 October 1909 :
The charm of a home wedding was beautifully carried out when Miss Mayme, daughter of Mr. and Mrs. Charles Willis, of Newport, and Dr. Rupert Hill Langdale, of Calcutta, India, plighted their troth last Tuesday evening. The house was redolent with roses and choice blooms. Formulated with palms and ferns was an improvised altar in the bay window of the drawing room. The bride entered with her father and the groom, and officiating pastor, Rev. Mr. Koch, awaited them. Miss Viola Langdale played the wedding march. The attractive young bride wore a white satin Princess gown.. Pearl trimmings were artistically arranged and a pearl bandeau graced her hand. She carried bride's roses tied with smilax, which fell to the hem of her gown. One of the most touching and beautiful features of the impressive ceremony was when the niece of the bride, Willie May Willis, the lovely little daughter of her brother, carried the ring on a satin pillow and offered the same most gracefully. She was a picture in a white frock of lace. After congratulations a dinner was served in courses.

After a visit to the groom's brother, Rev. Langdale, of Boston, they will sail from New York, visiting Algiers, Tunis, Morocco, Naples, Rome and the Holy Land. They will be at home in February.

The bride's mother was gowned in rich black lace; the groom's mother wore pearl gray silk, with garniture of real lace. The bride's sister-in-law, Mrs. William Willis, wore a becoming gown of black lace. The gifts were numerous and handsome.8