F, #165, b. 17 November 1861, d. 25 February 1942
Agnes Ballantyne Scott was listed as a witness to the marriage of Agnes Ballantyne Scott. She was born on 17 November 1861 at Bowmanville, Clarke Twp., Durham County, Canada West, United Province of Canada.4,3,2,5,6 Agnes married Robert David Moffat on 11 December 1889 at Darlington Twp., Durham County, Ontario, Canada.7,3,2,5
Other information from their marriage registration:
The registration listed the following official witnesses: James Moffitt. His parent(s) were listed as Walter Moffitt and Agness Moffitt. Her parent(s) were listed as William Scott and Helen Scott.7

She is survived by her family of seven, Mrs. Geo. Allin (Jean), Mrs. W.F. Rickard (Clara), of Newcastle, Will, Blake, Sheldon and Bob of Orono, and Harve of Milton, and sixteen grandchildren.

The funeral was held from Park St. Church, Orono, on February 27th, where a large number of relatives and friends gathered to pay their last respects. The service was conducted by Rev. S. Littlewood, assisted by Rev. R.E. Morton. The pallbearers were Messrs. Geo. Scott, Gordon Scott, Arthur Ross, Clarence Werry, Kyle Squair and George Allin. Interment was in Orono Cemetery.5

In the obituary of Thomas Blake Moffat who died 28 June 1958, his mother, Agnes Moffat was listed as predeceased.9

The following biographical information was shared , 19 September 2012:
Floyd Oscar Trask was born August 20, 1893 in Girard, Crawford, County, Kansas. He was the youngest child of Rueben and Minerva Bennett Trask. He grew up in the Washington Township area of Crawford County. His father was a well-known farmer in the area.

Floyd Trask married Lola Faye Bass April 12, 1913. They initially resided in Crawford County, Kansas; their first child, a daughter, was born there. About 1917, they immigrated to Canada. Floyd was a farmer in the Hill View District of Saskatchewan, Canada. In 1951, Floyd and Lola moved to Harris.

Floyd and Lola had five children--three daughters and two sons. Floyd was widowed in 1972.

The following biographical information was shared , 11 October 2012:
Lola Faye Bass was born October 27, 1882 in Farlington, Crawford County, Kansas. Lola was the daughter of James William Bass and Mary Jane "Jennie" Stiteler Bass. She grew up in the Farlington area of Crawford County.

Lola Faye Bass married Floyd Oscar Trask April 12, 1913. They resided in Girard, Crawford County, Kansas until 1917. Their first two daughters were born in Crawford County. They then moved to Saskatchewan, Canada where Oscar's brother's had moved a few years earlier. They farmed in the Hill View District.

F, #171, b. 27 October 1946, d. 5 June 1974
She was born on 27 October 1946 at Saskatoon, Saskatchewan, Canada.2,4,3
She died on 5 June 1974 at Saskatoon, Saskatchewan, Canada, at age 27.6,4,7,8
The following selected information is extracted from her obituary. Survivor(s): Delbert Summach, Mrs. Delbert Summach, Karen Memory and Floyd Trask.9      Myrna Vivian Summach was buried on 7 June 1974 at Woodlawn Cemetery, Saskatoon, Saskatchewan, Canada.6,7,10
In circa 1966, Delbert, Vivian, Karen and Myrna were included in a family photograph.11
See the footnotes below for a link to her obituary that appeared StarPhoenix published in Saskatoon, Saskatchewan, 8 June 1974.9
In the obituary of Delbert Justin Summach who died 5 December 1983, his daughter, Myrna was listed as predeceased.12
The following biographical information is from my (Rick Moffat's) personal knowledge or recollections, 1998:
I drove from PA, where I was working at Burns Foods, to Saskatoon for the funeral. However, they changed the time, so I missed the actual service. Mom didn't think of letting me know. I joined everyone at Deb and Binnie's house once I got to town.13 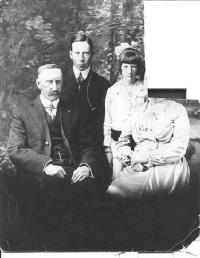 In a Mar 5, 2005 email message, Alice Sparrow remembers that "My Grandfather , as far as I know was never a police man. He sold shares in the Grain Growers Company. He died in Shand ,Sask from food poisoning (officially) , My mother felt he died from an overdose of Sulfer. He was afraid of getting the flu, so he burnt sulfer on the stove as well as ingested it , somehow, She said his urine was blue, so I would tend to concur with her theory. He is buried here in Souris, along with his wife, Tossie my mother and James Rainey his father-in-law."22