The following obituary appeared in the newspaper the Times Herald published in Port Huron, Michigan 4 September 1933:
Former Salt Employe Dies In St Clair, Services Tuesday
St. Clair, Sept. 4--Miss Ida Mau, 37, died Sunday morning in her home here, Riverside avenue, after an illness of three months.
Funeral services will be held at 2 p.m. Tuesday in the family home and at 2:30 p.m. in St. Peter's Lutheran church, with Rev. G.W. Lenz, pastor, officiating. Burial will be in Hillside cemetery.
Surviving are her father, Chris Mau and a sister, Miss Ann Mau, both of St. Clair; three brothers, William, also of St. Clair and Fred and Henry, both of Detroit.
She was born July 26, 1896, in this vicinity. She entered the employ of Diamond Crystal Salt company in 1927 and worked in the office until 1930 when she was transferred to the General Foods, Inc., office in New York city. She returned to her home here three months ago on account of illness.2

Thomas F. Rorke appeared on the 1901 Canadian Census of Collingwood Twp., Grey County, Ontario in the household of his parents, Richard Rorke and Christina Rorke.1,3,2
He was commonly known as Frank.4
In the obituary of Christina Rorke who died 3 May 1926, here son, T. F. Rorke of Rockhaven, Saskatchewan, was listed as a survivor.5

Other information from their marriage registration:
The registration listed the following official witnesses: Erma Beatrice Zummach.5
Myrtle Ray Zummach submitted a delayed birth registration for herself on 25 July 1961, at Ontario, Canada. She signed the declaration as Myrtle R Schimens.3
She died.9

M, #12055, b. 14 July 1905
Pedigree
He was born on 14 July 1905 at Golden Lake, Renfrew County, Ontario, Canada, according to Ontario Birth Registration 041348.2,1 Leslie married Myrtle Ray Zummach on 23 June 1930 at German Baptist Church, Killaloe, Hagarty Twp., Renfrew County, Ontario, Canada, according to Ontario Marriage Registration 019830. They were married by Rev. William Jaster.3,4,1,5
Following is other selected information from a newspaper article about their wedding:
The Maid of Honour and Best Man were Agnes Zummach. They were attended by Erma Zummach. Esther Junnop served in other roles (see their page for details.)5

Other information from their marriage registration:
The registration listed the following official witnesses: Erma Beatrice Zummach.1
His name was recorded as Henry Leslie Schiminz on his baptism registration.2 His name was also recorded as Leslie Schimmins.6
The following article appeared in the Ottawa, Ontario The Ottawa Citizen, 27 June 1930 :
Schimmens - Zummach
Pembroke, June 27 -- An interesting wedding took place Wednesday at 3:00 p.m., in the Baptist Church at Killaloe, when Myrtle Ray, daughter of Mr. and Mrs. J.H. Zummach, became the bride of Leslie Henry, son of Mr. and Mrs. Henry Schimmens, of Golden Lake.
Rev. William Jastor, minister of the church, officiated at the ceremony and Miss Esther Junnop presided at the organ.
The bride, who was given in marriage by her father, was attented (sic) by her sister, Miss Agnes Zummach, as maid of honour, and another sister, Miss Erma Zummach, as bridesmaid. Little Miss Jean Kuehl was flower girl. The groom was supported by William Krohn. The church looked very attractive adorned with pink and white peonies.
The bride wore a charming gown of Oyster shade georgette with chantilly lace trimmings fashioned on princess lines, the bodice having long tight sleeves. Her veil of embroidered net which formed a train, was held to her head with a wreath of orange blossoms Her bouquet was of pink roses, lilies and fern. The maid of honor was in a dress of maize georgette and carried yellow rosebuds and fern.
The bridesmaid wore a pretty dress of madonna blue and carried American Beauty rosebuds. The winsome little flower girl was in a frock of pink silk, trimmed with ruffles of satin, and carried a basket of garden flowers.
Following the ceremony a reception was held at the home of the bride's parents, the rooms being attractively decorated with cut flowers and fern. Mr. and Mrs. Schimmens will reside in Golden Lake.5

In the obituary of Wilhelmina Verch who died 7 March 1945, Wilhelmina's son-in-law, Leslie Schimmins was listed as a survivor.7

Following is other selected information from a newspaper article about their wedding:
Agnes Zummach served in other roles (see their page for details.)4 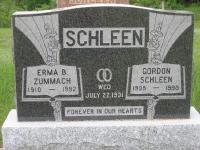 Following is other selected information from a newspaper article about their wedding:
Agnes Zummach served in other roles (see their page for details.)4 Immanuel Baptist Cemetery
Gordon Schleen & Erma B. Zummach
Gordon Schleen was buried at Emmanuel (aka Immanuel) Baptist Cemetery, Killaloe-Hagarty-Richards Twp., Renfrew County, Ontario, CanadaG.11
His name was recorded as Gordon Schileen on his birth registration.8
The following article appeared in the Renfrew, Ontario Renfrew Mercury, 6 August 1931 :
A very pretty wedding took place last Wednesday in the Baptist church, when Miss Erma Zummach, third daughter of Mr. and Mrs. J. H. Zummach, was united in marriage to Mr. Grodon (sic) Schleen, youngest son of Mr. and Mrs. Wm. Schleen. The bridal couple entered the church while the wedding march was being played by Miss Agnes Zummach, sister of the bride. The bride, who was dressed in white georgette with veil and orange blossoms, and carried a bouquet of roses, lily of the valley and maidenhair fern. She was attended by her sister, Miss Meta Zummach, who was dressed in mauve georgette and carried a bouquet of carnations and maidenhair fern. Mr. Milton Zummach, brother of the bride, acted as groomsman. Supper was served at the home of the bride. Many useful gifts were received.4