M, #1027, b. 29 December 1915, d. 6 April 1984
Pedigree
He was born on 29 December 1915, in the Asquith district, at RM of Loganton, Saskatchewan, Canada.3 Malcolm married Grace Meredith, at the home of her parents, on 9 March 1940 at Asquith, RM of Vanscoy No. 345, Saskatchewan, Canada.4,5,3
Following is other selected information from a newspaper article about their wedding:
They were attended by Amy Meredith.5 Herbert Hill White began military service on 11 October 1916 at the age of 36 years, 2 months and 11 days at Camp Borden, Ontario, Canada. On his enlistment papers.8
On his WWI Attestation papers he was listed as an unmarried printer living in Cincinnati, OH before he enlisted (Regimental Number 264619, File location 10291 - 47).

He sailed from Halifax on board the Titanic's sister ship, the HMS Olympic on Dec 15th, 1916 and arrived in England on Dec 18th, 1916 according to his Casualty Form - Active Service form. However, a second form included in his military records is stamped that he "arrived in England S.S.Olympic 28 12 16." He was posted to Purfleet where he as in the 211th Battalion on transfer to the Canadian Railway Troops. On March 21st, 1917 he was transferred to the 8Th Battalion CRG and on the 31st he was transferred to the 6th Battalion. He was sent to France, where he arrived on April 3rd, 1917. He was promoted to Lance Corporal with pay on Apr 1st, 1918, and was granted "one G.C. Badge L/CPL" on Oct 11th, 1918. He embarked on H M T Celtic in Liverpool to return to Canada on March 10th, 1919.

This is from "A Call to Arms" The Organization and Administration of Canada's Military in World War One by David W. Love, page 251:
"Being attached to all the British Armies, Canadian Railway Troops came under separate establishment and authority than that of the Canadian Corps. They were also separate, until 1918, from the Canadian Overseas Railway Construction Corps. To handle the influx of units and subsequent reinforcements, a 'Canadian Railway Troop Depot' was established at Purfleet, England.
By April 1917 there were six Canadian railway battalions equipped and operating in the field. As well, four companies of skilled railway employees had been sent overseas, and subsequently redesignated according to their specific functions (the 58th Broad Gauge Operating Company, the 13th Light Railway Operating Company, the 69th Wagon Erecting Company, and the 85th Engine Crew Company). Each company had an establishment of three officers and two hundred and sixty-six other ranks.

The Canadian Railway Troops weren't involved in any of the fighting on the Western Front. Their main function is as their war diary suggests, grading railroad beds, laying tracks, digging ditches and any other job required to build rail lines. The 6th Canadian Railway Troops war diary give an excellent day-to-day account of their duties. Again from Love's book, page 250:
"The largest body of Canadians on the Western Front, separate from the Canadian Corps, was the Corps of Canadian Railway Troops. A force of experts on railway construction. From early 1915 to the signing of the Armistice, Canadian Railway Troops were responsible for the construction of all the light railways in the areas occupied by the five British Armies and sixty percent of the standard gauge lines radiating from the channel ports to the actual battle zones (light and standard gauge railways were steam-powered, Canadian Corps tramways were gasoline powered). Considered as non-combatant troops, railway workers were unarmed for most of their service at the front."

You might be interested to know the 6th Canadian Railway Troops was formerly the 228th Infantry Battalion, CEF.8,13 Herbert Hill White ended his military service on 21 March 1919 at No. 2 Military District Depot, Toronto, Ontario, Canada,
End of Military Service section.8 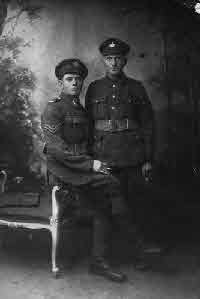 Corporal Bert White on left, taken in Belgium just after the Armistice in November 1918

Herbert White appeared on the 1900 U.S. Federal Census of Cincinnati, Hamilton County, Ohio, in the household of Matilda Brennan, listed as "publisher paper."10

Herbert H. White appeared on the 1920 U.S. Federal Census of Cincinnati, Hamilton County, Ohio, in the household of Edward H. (sic) and Jessie W. White.9
He was commonly known as Bert.14 Herbert Hill White immigrated in 1898 to USA from Canada.10
In the obituary of Frances Elizabeth White who died 21 February 1904, her brother, Bert of Rochester, N.Y., was listed as a survivor.15 He immigrated in 1908 to USA from Ontario, Canada.16
Bert sent a novelty wooden postcard to his mother sometime between 1906 and her death in 1919. It read:

Dear Mother
Had a card from Tom yesterday from Nelson, B.C. He said George was spending a day or two with him. All well. Had these little pictures taken last night; Love B W
(I assume this is Bert and not his brother Bob White)

Wooden postcard from "B W" to his mother, Mrs T B White"
I identify this as Bert White but it may be his brother Bob Reverse side of wooden postcard
Herbert Hill White crossed the border on 4 October 1916 to Canada; from the USA.16 He arrived on 18 March 1919 at Halifax, Nova Scotia, Canada; his rank was given as "Cpl" or Corporal. His next of kin was his mother, and his destination was Toronto.18


In the obituary of Martha Smith who died 13 July 1919, her son, Herbert H. White of Cincinnati, ON, was listed as a survivor.19 He crossed the border on 24 July 1919 at Port of Detroit, Detroit, Michigan, USA; He gave his occupation as printer. His last permanent address in Canada was Perry (sic) Sound, and he listed his brother, Thomas B White as his nearest Canadian relative. His destination was 901 Chateau Ave., Cincinnati, Ohio where his mother, Martha White had lived with his brother E Frank White and his family. She had died on July 15th, so his reference to her as next-of-kin was an anachronism.16
The following obituary appeared in the newspaper The Ottawa Citizen published in Ottawa, Ontario 2 February 1943:
WHITE - suddenly at a local hospital, on Tuesday February 2, 1943 Herbert White, aged 62 years, of the Government Printing Bureau. Resting at the parlours of McEvoy Brothers, 235 Kent Street, [of?] Nepean, until Wednesday at 7 a.m., [?]are to Union Station, en route to Gananoque for service and interment.12

The following obituary appeared in the newspaper The Ottawa Journal published in Ottawa, Ontario 2 February 1943:
White - suddenly at a local hospital, on Tuesday February 2, 1943 Herbert White, aged 62 years, of the Government Printing Bureau. Resting at the parlour of McEvoy Brothers, 235 Kent Street, corner of Nepean Street, until Wednesday at 7 a.m., thence to Union Station, en route to Gananoque for service and interment.11


HERBERT (Bert) HILL WHITE was born 30 Jul 1880 on Beaver Valley Farm, Grey County, Ontario, Canada, and died 02 Feb 1943 in Ottawa, Ontario, Canada. He was the youngest son of Thomas Boothby White and Martha (Smith) White. The farm was located on the 10th line of Collingwood Township at lot 18.

Sometime after his father's passing in 1895 Bert moved to Cincinnati, Ohio to live with or near his brother E. Frank White and his mother. She had been born and raised in Dearborn County, Indiana near Cincinnati. Frank White was a printer in Cincinnati. Bert gives his Trade or Calling as Printer in his Attestation Paper. At the time of his enlistment, Bert would have been 36 years old. In his Attestation Paper he gave his year of birth as 1882. I wonder if there was an age limit of 35 years at the time of his enlistment? As noted in his war diary, he returned to Canada in October 1916 to enlist.

I have in my possession two medals that have Bert's name and serial number engraved on the rim. See the following link for information about them:
Victory Medal
British War Medal

After the war, he returned to Cincinnati. At some time, he returned to Canada and began working for the Government Printing Bureau. Upon his passing, he was taken to Gananoque where his sister Martha Ann (Annie) Jane Sine lived.

Should this book be found,
kindly forward it to the undersigned.
To you these writings may not mean much,
To others they mean everything that's dear.
Thank You!

My dear Myrt and all,

Had this taken while on visit to Brussels, Belgium, Dec 8th, 9th and 10th, 1918. I still look very stern, but really did not feel that way. Came here on Friday last for 14 days. May go to Father's birthplace on latter part of fourlough (sic). Do not know when we will sail for Canada. That real good xmas parcel rec'd day before I left camp. Thanks, Thanks. Yours Bert

Myrtle (White) Moffat was Bert's youngest sister. She was born in 1878. At the time of writing, she was living on a farm near Frobisher, Saskatchewan. His father's birthplace was Ludborough, Lincolnshire.14,20