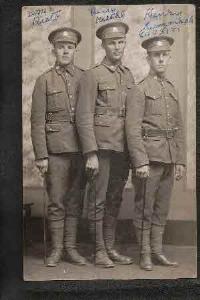 Mr. Lora had been station agent at Renfrew for the past 11years, was a brother of Ernest Lora, Claude Lora and F. D. Lora, all of Ottawa.

According to information obtained by the Lora family here, Mr. Lora was lighting the stove in the waiting room and was pouring on the flames some coal-oil or gasoline from a bottle. Mr. Lora apparently thought it was some oil he was using and did not realize it was some highly flammable fluid.

An explosion occurred and his clothes were set on fire.

The building also caught fire and Mr. Lora vainly tried to put out the flames before he finally gave up and ran out of the building. By that time he was virtually a flaming torch.

At the hospital it was found his whole body was covered with second and third degree burns.

The Renfrew Fire Department responded to an alarm and kept the fire from spreading to the other parts of the building.

Born at Osgoode Station, Mr. Lora was a son of the late Mr. and Mrs. John Lora, and before going to Renfrew he was station agent at Killaloe for some 20 years.

Surviving in addition to his three brothers in Ottawa, are his wife and two children, Harold of Sudbury, and Mrs. Stewart Duff, of Renfrew; two sisters, Mrs. E. Howell, of Kars, and Mrs. Fred Carlyle, of Vernon.

The funeral arrangements have not been completed.4

A private service was held at his residence at Prince street at two o'clock. A half hour later the mile-long cortege wound slowly through the streets from his home to the United Church where service was conducted by Rev. R. D. Wright, of Renfrew, assisted by Rev. L. D. Begg, of Vernon, Ont., and Rev. H. B. Neal, of Renfrew. Interment was in Thompsonville cemetery here.

Death Accidental
The death of Herman Lora, C.N.R. station agent, was caused from Toxaemina poisoning and shock, according to the finding of the coroners investigation conducted by Dr. J. J. McCann, who deemed no inquest was necessary.

Lora died in the Victoria hospital on Thursday following an explosion from a stove he was attempting to light in the station.

Practically his whole body was severely burned when his clothes were ignited. He had been station agent at Renfrew for the past 11 years.8

F, #2070, b. 27 April 1894
Pedigree
She was born on 27 April 1894 at Ontario, Canada.1
Aurena Becker appeared on the 1901 Canadian Census of Hagarty Twp., Renfrew County, Ontario in the household of her parents, William Becker and Alberteena Becker.1
30 July 2011 Research notes:
Aurena may be the same child as Wilhelmina. Aurena was listed in the 1901 census, but Wilhelmina was not. Conversely, Minnie was listed in the 1911 census, but Aurena was not. They were young enough that they both should have been enumerated with the family, if they were siblings.2

M, #2074, b. 5 August 1928, d. 3 April 2013
Pedigree
He was born on 5 August 1928 at Palmer Rapids, Raglan Twp., Renfrew County, Ontario, Canada.1
He died on 3 April 2013, at his home, at Palmer Rapids, Renfrew County, Ontario, Canada, at age 84.3
The following selected information is from his obituary. Predeceased by his parents: John Krieger and Agnes Krieger. Predeceased: Raymond Krieger.3
Murray Elwood Krieger was included in a circa 1929 photograph(see below.)4 In the obituary of Samuel Christie Krieger who died 29 May 1972, Samuel's pall-bearer, Murray Krieger, was listed as a survivor.5
See the footnotes below for a link to his obituary that appeared in his memorial page on the now obsolete YourLifeMoments.ca, circa 4 April 2013.3

F, #2075, b. 4 April 1951, d. 10 June 2016
Pedigree
She was born on 4 April 1951 at Saskatchewan, Canada.1,5
She died on 10 June 2016 at St. Paul's Hospital, Saskatoon, Saskatchewan, Canada, at age 65.5
The following selected information is extracted from her obituary. Survivor(s): Walter Miller. Predeceased: Wes Davidson and Pat Davidson.5      Barbara Jean Miller was buried at Wheatfield Cemetery (land location NW ¼ 24 36 11 W3), RM of Perdue No. 346, Saskatchewan, Canada.5
In the obituary of Patricia Davidson who died 21 December 2004, daughter-in-law, Barbara Jean Miller, was listed as a survivor.6
See the footnotes below for a link to her obituary that appeared in the newspaper the StarPhoenix published in Saskatoon, Saskatchewan, 14 June 2016.5

In the obituary of Walter Joseph Miller who died 16 June 2018, his daughter, Barb Davidson was listed but the obituary did not indicate that she was predeceased.4

F, #2078, b. 17 March 1927, d. 21 December 2004
Pedigree
She was born on 17 March 1927 at Perdue, Saskatchewan, Canada.2 Patricia married Wesley Davidson on 27 July 1946 at Saskatoon, Saskatchewan, Canada.1
She died on 21 December 2004 at Asquith, RM of Vanscoy No. 345, Saskatchewan, Canada, at age 77.2
The following selected information is extracted from her obituary. Survivor(s): Barbara Jean Miller. Predeceased: Wesley Davidson, Hazel (?), Fred Strate, Celia Jennet Beirnes, Francis Ernest Davidson and Neil Bernard Davidson.2
In the obituary of Francis Ernest Davidson who died 1 February 1981, his daughter-in-law, Pat Davidson, of Asquith, was listed as a survivor.3
In the obituary of Barbara Jean Davidson who died 10 June 2016, her mother-in-law, Pat Davidson was listed as predeceased.4